News24 editor Adriaan Basson has said he will probably open a case with the SA Police Service against an EFF supporter with the handle @tsk_tsheko, who took to Twitter on Tuesday to threaten to slaughter “white animals” and to kill “people like” Basson.

The EFF supporter, “TshekoTsk”, who appears to be a devoted party member, has since deleted his tweet.

He was responding to a news article about Black First Land First (BLF) leader Andile Mngxitama’s call to kill white people over the weekend.

TshekoTsk said that although he had never agreed with Mngxitama on any issue before, this time he did, adding that “action” had to be devised to kill white people such as Basson, who has recently been very critical of the EFF leadership, particularly Julius Malema. I'm tempted to create my own social media platform which I may call 'SMARTER'. The difference with Twitter is that mine will have an entrance exam and the pass rate will be higher than 30%. Only logic and reasoning will be allowed. No profanities. Sorry Zanele. https://t.co/82mlHptggr 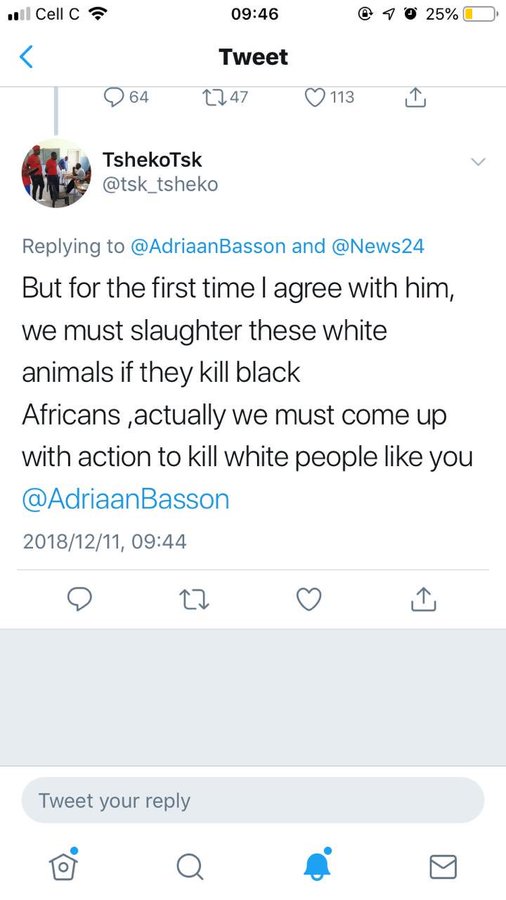 He told Basson directly, tagging him: “But for the first time I agree with him [Mngxitama], we must slaughter these white animals if they kill black Africans, actually we must come up with action to kill white people like you.”

Responding to Nomboniso Gasa, who asked him if he was okay after the threats, Basson said he would “probably” open a case with the SAPS today.

“Even if it’s just for the record,” he said.

Basson also reported the tweet, which is probably why the EFF supporter has deleted it. He was apparently trying to reach out to the person “for a conversation”.

Basson no longer appears to be on friendly terms with Malema after the EFF leader referred to him as a “racist thing” and Basson then wrote an opinion piece alleging that Malema and his politics have been “unravelling spectacularly”.

Responding to EFF secretary-general Godrich Gardee’s tweet last week reminding EFF members about the party’s first land expropriation without compensation advert, TshekoTsk said he was proud to be part of “this generation”.

He revealed that he had been arrested three times between June 2017 and July this year because of “this land struggle”.

Jacques Pauw was also on TshekoTsk’s radar two weeks ago after the journalist published the Malema family home’s address on social media.

TshekoTsk said if Malema’s family was hurt due to this, Pauw would have to flee the country to escape the consequences.

“We will make sure you become first casualty. We will deal with your whiteness accordingly,” he said.

SANEF asked me to delete the tweet with the address of Julius Malema’s house in Mazzotti’s complex. I thought it was justified to post his address as it is a guarded complex with state-of-the-art security. SANEF says it was wrong to do so. I accept that and deleted the tweet.

https://newsoweto.co.za/eff-threatens-to-kill-white-journalist-in-support-of-mngxitama-kill-all-whites-speech/2018-12-12T13:50:46+00:00[email protected]National
White journalist has been threatened by a member of the Economic Freedom Fighters in support of Black Lands First leader Andile Mngxitama News24 editor Adriaan Basson has said he will probably open a case with the SA Police Service against an EFF supporter with the handle @tsk_tsheko, who took to Twitter...
[email protected]Victor Isioma[email protected]AdministratorNewSoweto

Mantashe receives collective resignation from entire board of Necsa

This site uses Akismet to reduce spam. Learn how your comment data is processed.