News from around South Africa

The African National Congress (ANC) did not expect what the got after weighing into the death of George Floyd who was killed by a policeman.

The ruling party blasted the US police for acts of brutality and placing a ‘lower value’ on black lives. However, the ruling party has also been criticised for the way they’ve handled domestic matters, particularly with the Collins Khosa case.

Khosa was killed by SANDF soldiers in April, after suffering blunt force trauma to the head when the army stormed into his Alexandra home. Despite the autopsy results, which directly link the violent actions of the soldiers to the fatal injuries the victim suffered, SANDF has cleared their representatives of any wrongdoing.

The case bears eerie similarities to the George Floyd incident. The black American citizen was murdered when Derek Chauvin, a white police officer, knelt on his neck for about nine minutes. Both cases mentioned resulted in two suspects losing their lives to the hands of authoritative brutality.

And yet, the ANC has decided to share a statement only on what’s happening Stateside. They released their views on social media, calling for ‘calm’ after the sixth night of protests erupted on the streets:

But their latest comments made about Collins Khosa were less sympathetic, and our top officials haven’t been prepared to show the same outrage with matters closer to home. A total of 11 people have been killed due to heavy-handed policing in SA’s lockdown. Ramaphosa’s response during a briefing on Sunday?

“They [SAPS and SANDF] let their enthusiasm get the better of them.” 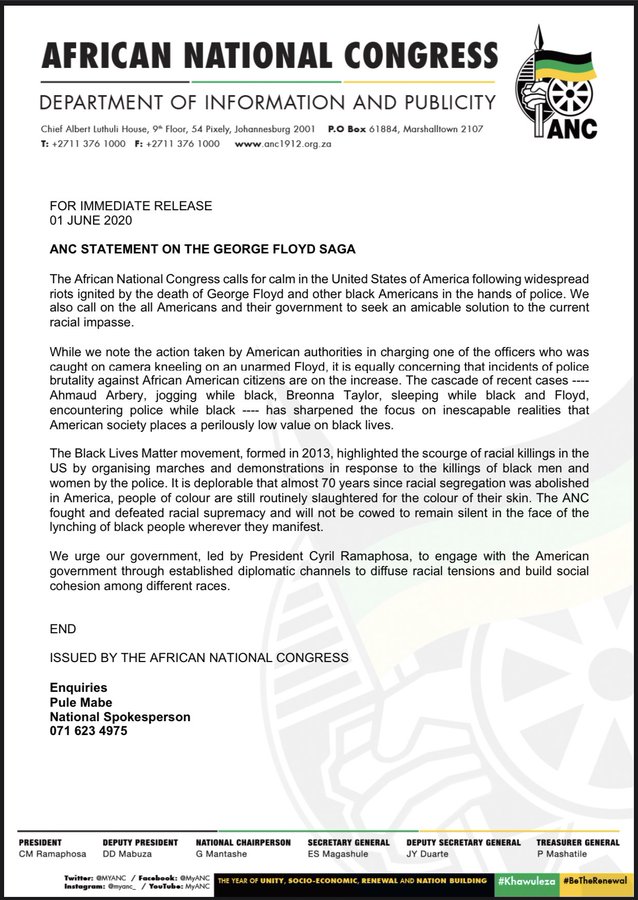 “Any suggestion that the soldiers were implicated in the murder of the gentlemen is a matter I don’t want to comment on. It is sub-judice.”

There has been no official party statement on the Collins Khosa case findings, despite the outrage that swept across the nation. By all means, the death of George Floyd must be called exactly what it is – a murder.

And, using a word we know Cyril likes, his government must show the same “enthusiasm” in securing justice for one of our own. Otherwise, the ANC isn’t really in a position to start throwing stones from a glass house.